Join us on Friday, February 24th at 6:15 pm as Angela Smith, founder of Shark Team One, discusses the expedition that inspired the film. Enjoy hors d’oeuvres, beer and wine, or bring a dish of your own to share!
“Tiger Sharks Fight for Survival” follows conservation organization Shark Team One to a remote underwater bank in the Bahamas where they discover multiple pregnant 15 foot female tiger sharks! The sharks are safe within the borders of The Bahamas National Shark Sanctuary but once they swim toward the East Coast, they are fair game for United States commercial fishermen.
This film features rare footage of pregnant females, highlights tiger shark reproductive science and inspires a greater understanding for how valuable marine sanctuaries are for the survival of critical species.

“Tiger Sharks Fight for Survival” is a film for all audiences and recently received Honorable Mention at the BLUE Ocean Film Festival. Click here for the film trailer.
Itinerary for the Evening:
6:15 – 7:00 Happy Hour!
(Food, drinks and socializing)
7:00 – 8:00 Film Premiere & Discussion by Angela Smith
Proceeds from our 50/50 raffle will go toward funding Shark Team One.
Questions? Call or email us!
(561) 840-8750
info.pvd@puravidadivers.com 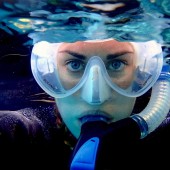 Melissa grew up exploring above and below the waters of South Florida. She holds a Bachelor’s Degree in English from Florida Atlantic University. Melissa joined the Pura Vida Divers' team in 2016. She is a PADI Divemaster and Tec 45 diver. To learn more about our team, visit the About Us webpage.